Walk Down “Iowan of the Day” Memory Lane

The Iowa State Fair Blue Ribbon Foundation created the Iowan of the Day program in 1997. The Foundation wanted to honor individuals that showed true Iowa spirit through continued volunteer work and community activities. We were looking for people who made exceptional contributions in their communities and across the state.

The program was introduced in the 1997 summer newsletter. “We are excited about this new program because it honors Iowans for many of the same virtues that the State Fair is recognized for,” said John Putney, former Blue Ribbon Foundation Executive Director. 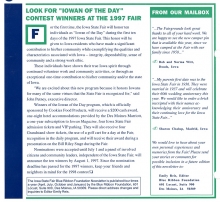 The first Iowan recognized on the first Thursday of the 1997 Iowa State Fair was Charlie Becker from Monticello. Charlie’s family enjoyed using the official Iowan of the Day golf cart throughout his special day.

Since that very first presentation on the Anne and Bill Riley stage, 230 Iowans have been given the honor of Iowan of the Day at the State Fair. These outstanding volunteers have represented 139 different towns from across the state. Do you see your hometown listed?

These men and women of all ages personify the qualities and characteristic associated with Iowa – integrity, dependability, sense of community and a strong worth ethic. From the very beginning Cookies Food Products and Des Moines Marriott, have supported the Iowan of the Day program as sponsors. Thank you.

The Iowan of the Day nomination applications aren’t due until July 1 of each year. This fall and winter, the Blue Ribbon Foundation encourages you to think about the members of your community that go above and beyond to make your hometown a better place to live. Consider nominating them for the award. 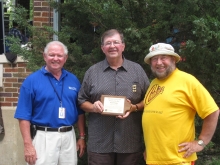 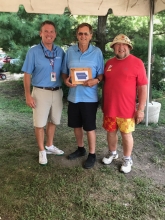 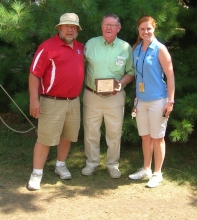 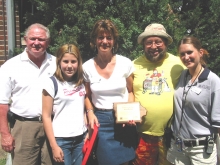 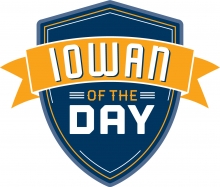