Blast from the Past!

Today is a busy day at the Iowa State Fairgrounds as the grounds have been taken over by the 21st Heartland Nationals Goodguys Car Show. Even though I know almost nothing about cars, it is still fun to look at all the different cars. Walking around the grounds today was a site to see as antique and colorful restored cars are lined up all across the fairgrounds. Having such a crowd stirs up anticipation for the State Fair, which is getting closer and closer! 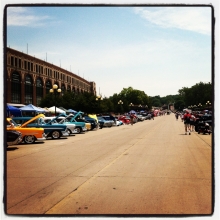 Such a large event also brought many Fair food vendors to the grounds this weekend. Not to shy away from an opportunity to indulge on Fair food early, all three of us interns splurged to get the popular pork tenderloin sandwiches.

Corndog Kickoff is on everyone's mind's here at the Blue Ribbon Foundation. Don't forget, if you haven't ordered your Kickoff tickets yet to come and participate in the fun, there's still time! Tomorrow is the last day for $75 advance ticket prices. Any ticket orders postmarked by tomorrow, June 30, will qualify for $75 ticket prices. Any tickets purchased or postmarked after July 1 will be $100 per ticket. Cookbook orders are also rolling in. 2012 Iowa State Fair Cookbooks are only $15 plus $9 for shipping and handling. These cookbooks feature a wide variety of prize-winning recipes from the 2010-2011 Iowa State Fairs. If you would like order a cookbook or Corndog Kickoff tickets, email me or give me a call at 515-262-3111 ext. 677. Cookbooks are also available online and will ship around mid-July. If you would like to order Corndog Kickoff tickets, click here.

Get excited for Corndog Kickoff and the Iowa State Fair! They will both be here before we know it!