A New Home for the Tractor Pulls

The Iowa State Fair is constantly growing and changing in order to offer the best experience for Fairgoers. One of those changes was to expand upon a very popular attraction: Grandstand concerts. In 2018, the Iowa State Fair’s renovations included creating a new stage area, expanded seating and new restrooms. Grandstand seating capacity went from around 10,000 to nearly 15,000 and the number of headliner concerts increased from nine to eleven.

While this was great news for concert-goers, it also saw the hiatus of another Fair tradition, the tractor pulls. For the past few years concerts have been filling the Fair evenings with music and crowds of fans but the unmistakable roars of competing engines has been absent. The tractor pull debuted at the Iowa State Fair in 1968, when crowds first became entranced with the thrill of seeing just how far an engine could go. Fans would gather to see who could pull the sled, weighing up to 60,000 pounds, the farthest. Drivers would clamor to prove their engine was the strongest, many blowing smoke and bobbing up on their back wheels in the process.

Certainly this tradition was missed but not forgotten as plans for its return were in the works. Thanks to a generous gift from Denny and Candy Elwell, 2021 will mark the return of the tractor pull with the creation of a new home, The Elwell Family Park. This park, located just west of the grandstand will host two tractor pulls at the upcoming Fair and will expand to include more events and seating in coming years. This year Fairgoers can once again expect to hear the Earth-shaking roar of tricked out engines and experience the adrenaline rush of watching motor engineering being pushed to its limits –and maybe a few feet farther. 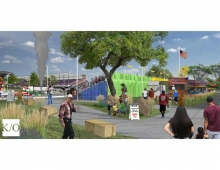